RSS
← Committment phobia? Here is a book for you
From my travel files…. LeSport Christmas 2008. Amy Winehouse RIP →

Why do they call it carbonara anyways…?

Spaghetti Carbonara…..The origin of this typical Roman pasta dish is as recent as the Second World War.  One story, which seems more the product of a fertile imagination than fact, tells of how American soldiers would go into Roman trattorie and order bacon and eggs with a side of pasta.  They were served a sunny side up egg and pancetta (or more likely guanciale, cured pork jowl) and a plate of unseasoned spaghetti.  When they mixed the two, Spaghetti alla Carbonara was born. Another story says that it was invented in a small town in southern Italy called Carbonia, by a chef who later moved to Rome and named the dish after his hometown.  Some people simply say it’s called “Carbonara” because the generous grindings of pepper look like coal dust (carbone means coal in Italian).  In any case, it is a luscious dish, whose creaminess comes from the raw eggs’ contact with the hot pasta rather than cream. …..  Thank you to the Educated Palate for that VERY informative description!  http://giulianohazan.com/blog/

It has been a favourite of mine for ages,  I introduced my brother to it somewhere along the way and he was just amazed that a pasta dish that was described at ‘bacon and egg pasta’  could be sooooo good.

Comforting and good it is. Too much of it… and you want to wretch.  There is a fine line bet 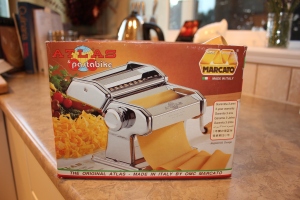 ween too much of it and too little of this very rich pasta dish.  Don was out tonite, and  as I hadn’t been cooking too much as of late, I needed some food therapy.  The Atlas was acting up,  I am not sure what is going on, but the spaghetti setting seems to be having some jamming issues…. this is the second time that I was troubled by it.  But alas, the spaghetti still turned out fine,  just a little thicker than usual.

Pasta is very easy.  Preferably you take 00 flour and mix with some eggs, salt and olive oil if you want, knead, rest and you have pasta.  Using the Atlas or something like it, makes the actual pasta making part WAY easier. While at cooking school,  the Atlas there had a motor…..Now we’re talking, I will certainly be asking for a motor for mine in the future!

After the dough rests, you run it through the machine, folding it on itself a number of times, then keep changing the settings and you have sheets.  Then add the spaghetti attachment, run it through, add some flour to keep it separated and you have spaghetti.  There are numerous instructions on the internet so I won’t bore you here with the fine details.

When I was at the Italian Bootcamp at the Culinary Institute of America(CIA) in November 2010,  our chef, Chefsky (don’t try to pronounce his last name), suggested a book that would certainly help us in our Italian cooking adventures.  The book, The Fine Art of Italian Cooking (Guiliano Bugia

lli) a book originally scribed in 1977, updated to 1990 and available on Amazon.com for 99 cents…. oops I stand corrected,  available for 63 cents,  but the 99 cent one was in Oregon and was the closest one to BC and so that was the one I ordered.  $3.99 to ship and so in my hands I had the cookbook recommended… and I felt that I had a ‘green’ book because I paid more to have it sent from a ‘closer’ spot…  sheesh…(what will be doing next!)  Well at least I had ordered a ‘recycled’ book.  This one ended up being in mint condition. 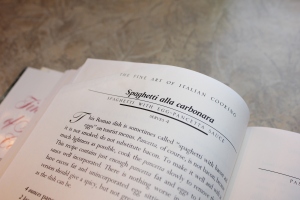 is job, I decided to use the carbonara recipe from this ever so revered book and I must say, I was not let down.  We have already addressed the spaghetti portion,  so now all you need are the rest of the ingredients.  The recipe called for pancetta,  and as I don’t keep pancetta on hand,  I used thick slab bacon instead.  I followed the instructions and rendered it down with garlic and red pepper flakes.  Let me interrupt here with the garlic here….. I had grabbed the VERY shrivelled garlic from the pantry… and then had the A-HA moment that my garlic in the garden would at this point be…. SPRING GARLIC.  Spring garlic is regular garlic that has not been dried.  The

of the recipe is easy,  after you have rendered the pancetta-bacon, you keep it hot, whisk the eggs and the grated parmesan cheese together in anticipation of the final ‘tossing’ into the hot pasta.

So the final stage is the fresh pasta thrown into a LARGE pot of boiling salted water, salted like the sea, according to our CIA chefs.  I use my 8 quart All Clad

pot and after a few short minutes, drain it, throw in a large bowl, toss in the rendered bacon, then follow immediately with the egg and cheese mixture and toss away.

← Committment phobia? Here is a book for you
From my travel files…. LeSport Christmas 2008. Amy Winehouse RIP →

2 responses to “Why do they call it carbonara anyways…?”